Refugee from Reich To Teach Modeling At Art Gallery 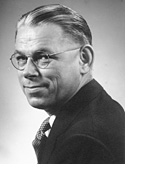 A sculptor with a growing American reputation for artistic work - who only nine years ago fled Germany to escape political oppression - yesterday assumed direction of modeling classes at the Memorial Art Gallery.

He is William E. Ehrich, 41, a pleasant-faced, soft-voiced, idealistic son of East Prussia with a passion for progressive art but with no patience for ultra-modernity either in his own field or in kindred arts.

Ehrich learned his craft in German art schools, starting out much in the same way that young men and women attend local classes to learn something of modeling or sculpture. Only his initiation was woodcarving, and today that aspect of art occupies much of his attention, he said.

While he still was studying anatomy and his craft in general at German art schools, Ehrich was called to colors. He was captured by Russians, held prisoner for two years, and when the Russians quit the war, made his own way to Germany. He then served on the Western Front. In later years he was to contribute his talent to the Tannenberg War Memorial. On the battlefield where Hindenburg is buried there stand several pieces of his work.

But he felt, with new political influences at work, that Germany held him prisoner. So he "escaped to America just before the crash" as he put it. For five years he's been an instructor in the Art Institute at Buffalo, and last year was named director of the Federal Art Project, a position he will hold while performing duties here.

Ehrich was called here in May to take over classes of Miss Blanca Will and his permanent appointment was announced last month.

He's a man enthusiastic about his art, who thinks it too bad that Americans build structures that are outmoded in a few years. It's "too bad" because there's no call for enduring sculpture in the architectural fields - a façade becomes "old stuff" not long after it's up.

Talking freely yesterday before he greeted his new classes, Ehrich said he'd like nothing better than to be turned loose on a mountain of cut stone, so he could pick out pieces entirely suited to ideas. He lines to work "directly" - that is, to chisel his conception on a stone directly from a living model. He likes the hardest stones, which he calls by the inclusive description "men" stones. Softer stone he avoids because it's "too ladylike" - a sculptor is tempted to go into too much photographic detail.

Those are his likes. Modern music is his chief dislike. But he believes that America, approaching a sort of advanced age, is becoming more appreciative of the arts in general.