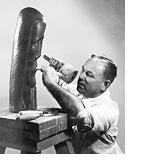 William Ehrich is a strong sculptor in wood and stone. His practice and teaching in Buffalo and Rochester have had a marked influence on the quality of the glyptic arts in their regional shows in those communities. Coming to the United States from Germany in 1929, Ehrich worked for three years before first showing his sculpture in a Western New York exhibition. This appearance brought him artistic favor and gained for him the patronage of Mr. and Mrs. Edwin Weiss of Buffalo - who helped him to continue his creative work. The sculptured portraits of Noel and Mary, on page 23, are of their children. In addition to these commissions, the Weisses own a number of other pieces by Ehrich.

In 1937, after several years of teaching at Buffalo, Ehrich was invited to Rochester, New York, to give instruction in modeling and sculpture at the Memorial Art Gallery and the University of Rochester. Sometime later, the sculptor moved permanently to Rochester where he continues to teach and practice. Besides exhibition pieces, Ehrich executes portraits and memorials, and when architecture and building revive, he hopes to do architectural sculpture - a field in which he was active in Germany before coming here.

His first one-man show in New York, at the Clay Club in 1941, elicited favorable notices from the critics. Emily Genauer likened his work to that of Barlach; others remarked on his fine craftsmanship and versatility in a variety of materials; all of them commented on the artist's creative and interpretive talents.

The Lillian Fairchild Award of Rochester, given annually to a resident of Rochester contributing the most meritorious work in the fields of art, music and literature, was awarded to Ehrich in 1942. Both the Albright Art Gallery and the Memorial Art Gallery have purchased representative pieces of his sculpture for their permanent collections.

The following notes on technique have been contributed by the artist:

"To begin with, it might be of some interest that I was born at the tail end of the last century when Impressionism was flourishing. As a small boy I liked to whittle, and early I went to art classes doing ship carving - supplying my parents, relatives, and friends with towel boards and boxes. When the time arrived for the decision concerning a career, my choice was to become a sculptor-carver. I was given in the care of an old woodcarver as an apprentice, and attended an art school part time. Nothing particular happened then until I began to attend classes full time. Though I received scholarships I was a bad art student. In life class, I did not pay enough attention to detail - made my instructor complain that I never would make the grade as an artist. In lettering I had my own ways, neglected too much the German gothic, and from the sculpture class I often took my compositions and carvings home to preserve some of the good points that were in them. My teacher was a fine modeler of animals for bronze. Of course he called himself a sculptor, too, as did all impressionist modelers. Little did he know of carving and its media. When he was commissioned to do the carvings for an entrance of a railroad station (in Roman Travertine) many of his small figure designs were unfortunately lost in some cavities of the coarse stone. As I did the execution I could not ask for a better lesson of an improper design for a beautiful, or, a bad material for a good design, as he put it!

"Maybe this association and experience made me the more stubborn in the distinction between modeling and sculpture. I consider the modeler's profession more related to that of the painter than to the sculptor, and since I could not afford bronze - having little chance to see my work in this final medium - I began to carve in resistant wood and stone and to follow my creation through to the end. Today, I pity the modeler for bronze. What does he know of the cooperation of carved metal, wood, and stone; the suggestions those resistant mediums offer in the forming; or how alive they become under the creator's hand?

"When I came to America, in 1929, I did not find the architectural employment I was hoping for, but I did see much modeling in clay. The local annuals consisted mostly of neat plaster heads or Rodinesque nudes in the same material.

"This greatly changed during the great depression. Understand me rightly - I think the depression was a grand thing for the arts in this country, though I hope we won't need a depression again to make our country more art-conscious.

"In 1933, when I was invited to teach sculpture in Buffalo, I soon experienced more-than-hoped-for results when I encouraged art students to carve as early as possible. Most class talk about sculptural form and other sculptural elements became unnecessary. The student grew up with it and his modeling improved too. Clay, as such, permits the artist to change his mind too often. I lose incentive to carve if I carry a sketch in clay too far. The thought of doing the same thing, detail for detail, from the clay model to the stone or wood, has something frightening in it. For this reason I confine myself mostly to quick bold sketches in clay only, sometimes supported by quick drawings. As soon as I have found a carving medium suitable for my idea I go after it, freeing my figure from the surplus around it. I am most concerned to leave as much volume as permissible on my figures instead of on the floor as shavings. Of course, as easy as it sounds, every step has to be considered beforehand - a mistake is often difficult to be repaired. It is much simpler in clay - you just put it back on.

"In most cases I start from the main view and cut the frontal outline in large planes, then proceed in the same manner from the side, leaving as much as possible in the back 'for backing up' in case I need more material in front or something goes wrong. I avoid all undercutting and begin to tie my planes together, gradually paying more attention to convex and concave surfaces. Only after I have my masses surely in place, do I begin to break the detail in with bold outlines, using only round gouges-never 'veiners.' A 'veiner' (V-shaped tool) tends to destroy unity of the figure - imparts too much drawing to it.

"The use of the mallet depends largely on the hardness of the material. For some of my carvings - for example, Canadian red oak - I had to use the mallet right to the finish. The surface treatment of the carving depends upon the wood and subject itself. On fine-grained wood and particularly on small figures, I prefer a smooth polish for 'touch' and to bring out the beauty of the grain. For final finish I used to apply beeswax which, dissolved in turpentine, I rubbed into the wood with my hands. More recently, I have been using, with good results, wood filler paste thinned down to a cream with boiled linseed oil. I apply it with a hard brush. After soaking it for ½ hour I rub the surface with burlap against the grain, in order to work the filler into the grain. Cracks in the wood I fill with beeswax by holding a heated metal rod against the wax over the crack. Finally on top of the sealer I use thin beeswax for polish.

"My most favored domestic woods are cherry and apple, though I am interested in trying any wood that comes into my hands. Right now I am carving osage orange, a beautiful golden-colored hardwood. No modeler can enjoy such thrills a carver experiences with a new medium. The sculptor's ways are slow and painful, require so much deliberation and thought; but because of this, his output is severe and lasting and can be felt and caressed as no other medium."

Virginia Ford Menadue, writing in the Buffalo Courier-Express for May 4, 1941, summed up Ehrich's sculpture contributions in the following terms: "You will find in this man's work no sign of any nationalistic feeling, no boundaries of time, no limitations of scholastic influence. There is a universal quality about the artist and about his output. Although he is not hampered by his media, he always gives the impression of the closeness between the original piece of wood or stone and the finished product."